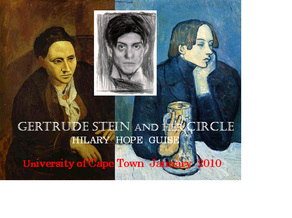 Gertrude Stein and Her Circle .  Series of three lectures

The Young Picasso  - in Paris

Manet -  Master of the Modern Idiom

Wine and the Vine in Art – with wine tasting. Single Lecture or Study Day

Manet – Master of the Modern Idiom

On Classical Greek art and culture:
The Olympic Games – Chariots of Fire  (for the Olympics and the Commonwealth Games)

The Parthenon – The Greatest Temple Ever Built

The Greeks – Their Art and Energy  (study day – three lectures)

Everyday Life in the Agora – Athens in the 5th Century BC. A Study from Greek vase painting

White Marble - Blue Sea. An imaginary journey through the Aegean in the Archaic age.

On Iconography:
The Sign of the Fish –  The rise of Judeo-Christian imagery in a Pagan World. (Study Day):

Love,  Sacred and Profane – the comparative iconography of the Aphrodite, Eve, the Magdalene and the Virgin

The Colour Red - Its Sacred and Secular meaning

British painting from Hogarth to Turner

The Art of Empire  – A study of Victorian reproductive engravings.

The Paul Mellon Foundation – a Passion for English Art